skip to main | skip to sidebar

Don't Make Me Spank You

Yeah, I'm talking to you!  We are rocking out over at AJ in the Left Lane.  Seriously, free booze.

Okay, maybe no free booze, but you are welcome to bring your own.  http://ajleftlane.blogspot.com/

Hey y'all!  Don't forget to come see me over in the Left Lane!  I've got some fun stuff coming up... promise :)

Seriously, it is November 1st... and I'm actually doing something on time.  Bear with me because there isn't much there quite yet.  Kind of an upgraded version of this blog.

I'm nervous and hoping and praying that I will do better with the new blog than I have with this one.  My friends and family actually know about the new one, as opposed to this one, so this should be fun!

Let me know what you think!  http://ajleftlane.blogspot.com/

I'm hoping that you will all continue to follow me.  I sincerely appreciate you reading my ramblings over the past year or so.  Thank you, and I hope to see you over in the Left Lane!

I know I have been completely absent pretty much the entire month.  If it helps, I have been working on my new blog.  I'm hoping to kick things off on Nov. 1st (this is the good news, ohbytheway)!  So stay tuned for the details.  It will be a little different from this one.  Not as much bitching and moaning, more fun.  Well, at least that is the intention.  Time will tell!

Oh yeah, and I'm pretty sure I have bronchitis.  Feel sorry for me?  I wish I could say that is my excuse for being so lazy lately.  And today is my 2nd anniversary.... and I'm sick.  Now do you feel sorry for me?
Posted by AJ at 11:55 AM No comments:

As much as I talk about Jake, I haven't really given an update on what he has been up to lately.  He goes back to the doctor for his four month check up and shots on October 18th.  Holy hell, did I just say four months?!  ZOMG.  Where has the time gone???

Anyway, I'm guessing he is around 13 pounds now.  He is laughing and "talking" ALL the time.  My heart feels like it will burst every time I see that huge, flirty smile.  He already has to fight off the ladies.  I can only imagine what trouble we will have on our hands in a few years!

I never thought I would be one to let me child watch tv at such a young age, but he loves Baby Einstein and Wonder Pets on Nick, Jr.  We limit his tv time to about 30 minutes to an hour, depending on the day and the time.  He talks to the tv almost as much as he talks to the mobile in his crib.

And speaking of his crib, he rarely fusses anymore when we put him down to bed.  We have established a great nighttime routine that consists of bathtime, storytime, and saying his prayers before we cut his mobile on and kiss him goodnight.  He gets pretty antsy during storytime- not sure if it is an aversion to Alice in Wonderland (J's pick, not mine) or if he is just ready to stretch out and go to sleep.

Mornings are his best time of day.  He is so incredibly happy!  When J or I peek into the crib he always looks surprised before a big grin spreads over his face.  He started sleeping through the night around 12 weeks, so I'm guessing all of that good sleep makes it easier to wake up in a good mood.

He has great control over his head and is really starting to show some strength during tummy time.  Sophie is his new favorite toy and he laughs like crazy whenever she sqeaks.  I was amazed the first time he actually reached out and tried to grab her.  He also loves his yellow taggie blanket.  We don't leave him alone when he has it, but he loves snuggling with it.

One thing that hasn't changed- he is never as happy and content as he is when he is in Mama or Daddy's arms.  He knows we are his, and that he is always safe with us.  It seems that every day he does something new.  I used to think that parents were crazy when they said that.  No way a kid can do something EVERY.SINGLE.DAY.  But y'all, I swear most days it seems true.
Posted by AJ at 4:58 PM 1 comment:

Hopefully, my blog no longer looks like a drug-induced haze of purple polka dots, so you all can continue reading my ramblings.  Not that there has been much to read as of late.  I could give you a host of excuses, but I won't bore you any further.
My sinuses are acting up from being outside all weekend.  We had Campmeeting (link for whole label), oh boy.  Usually, I have fun, but not so much this year.  Probably because I can no longer go eat, drink, and be merry.  I was really worried about how Jake would handle everything.  He hated it.  I'm guessing he was just completely overwhelmed by all of the sights and sounds.  Not only that, but now he is a little congested.  I feel bad for him.  But OH MAH GAWD he looked so ridiculously cute in his little camo fleece.  And not really suprisingly I forgot to take pictures.  Oh, and you probably won't see pictures of the big Sunday- like last year- because I look horrible.  No lie.

So, I figured since I won't be sharing any of those pics, I will show you some random picture that I just downloaded. 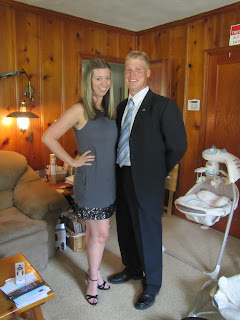 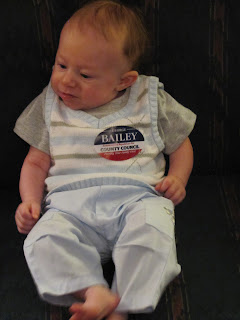 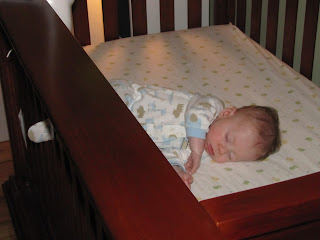 Sleepy head with his foot sticking out of the crib﻿
Posted by AJ at 2:32 PM No comments:

Okay, I've made a decision

And I hope you will all stick with me.  I'm going to start a new blog.  When I started this one, I wanted something for myself.  It was never intended to share with family and friends.  For some reason, I think I want to do things a little differently now.  I've already discussed it with J and he is interested, so I think I'm going to just do it.

I didn't really know what to expect with this blog, and I'm honestly not sure what to expect with a new one other than the fact that people who know me IRL will know about it.  There have been times that I have shared maybe a little more than I would have if I knew that people who knew me were reading (and yes, I understand that I took a risk by putting it out there in the first place).

With all of that said, my new blog is going to be a little different. I will still be sharing personal information, just probably not as detailed as I have been at times.  Also, I plan to talk a lot about products I like, recipes, books I've read, shoes, and a lot of other things that I never got to on this blog.

I'm really hoping that you will like it!  And if you don't, I really hope you will kick me in the ass and tell me that I screwed up.  I'm also not deleting this blog in case I decide to come back to it... though I'm not sure how that would work.

I'm going to start setting things up today and hopefully be online in the next couple of weeks.  I will definitely still be posting here in the meantime.  Oh, and my new blog is going to be pretty!  In other words, I'm having someone design it for me! 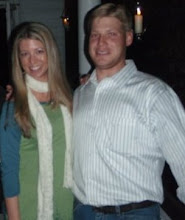 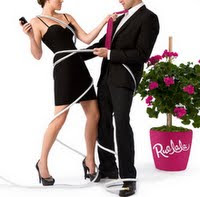 Invitation only! Members get their most wanted designers at private sale prices. Click on the pic for an invite!

On Gilt you have access to the top names in fashion and luxury at up to 70% off retail. Click on the pic for an invite! 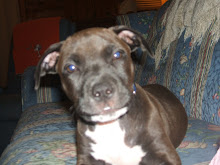 My sweet baby Duke and his beautiful smile